Glimpses of the Treme: Saying Goodbye to New Orleans

On my last two days in New Orleans I got two brief glimpses of the famed Fabourg Treme. Again, I admit that most of my knowledge of the district comes from the TV series of the same name, but regardless of how I found out about it I'm glad that I did.

Our first trip into the neighborhood was with a Haunted History Tour. We visited Saint Louis Cemetery #1, which is the location of the tomb of Voodoo Queen Marie Laveau. For film buffs, it's where Dennis Hopper and Peter Fonda trip on LSD in Easy Rider. Apparently that was the first and last film that ever got to use that cemetery. Needless to say, the Catholic Church was not very pleased with the movies' use of it. 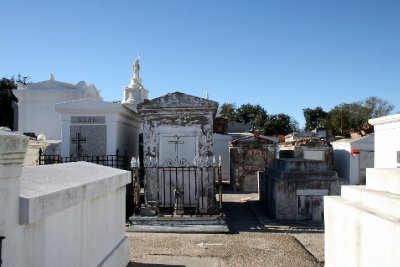 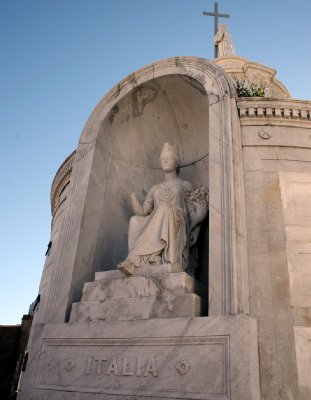 To top it all off, there is a resident black cat named Marie. Being the Crazy Cat Lady in Training that I am, I was thrilled. But it made me miss my kitty at home, Bruce Wayne. 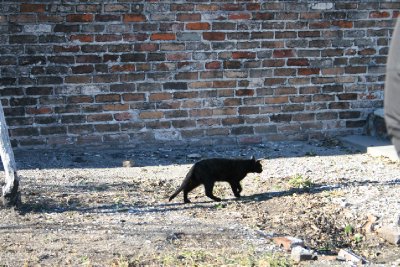 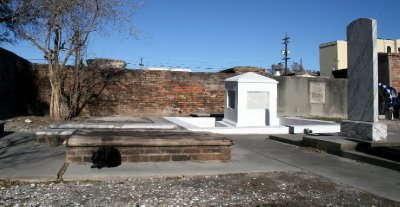 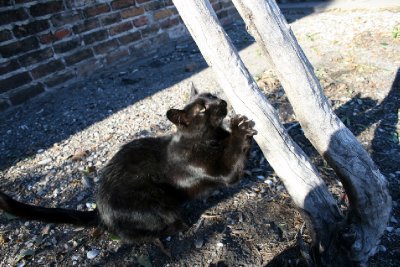 Today we ventured into the Treme without a tour guide. Our destination was the Backstreet Cultural Museum. It was a wonderful exhibit that I highly recommend to anyone that comes here. We were greeted at the door by Francis Sylvester, the owner of the museum, Treme historian, (former?) Mardi Gras Indian, father of an Indian Queen, and self described "camera man" (not a "photographer" because photographers have "fancy equipment that they don't know how to use").

The first room he took us to was lined with Mardi Gras Indian costumes. I walked in and my jaw hit the floor. Remember how excited I was in the last post to see just one on Bourbon Street? Well, this is what was in that first room: 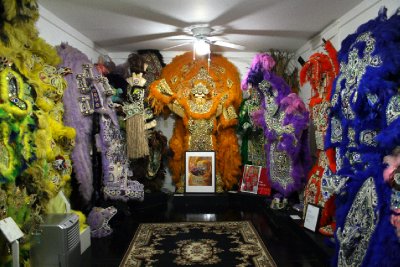 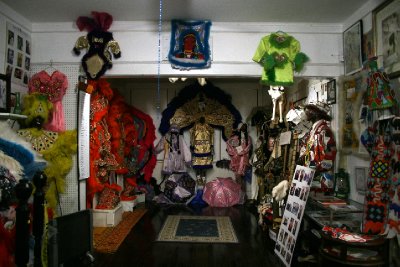 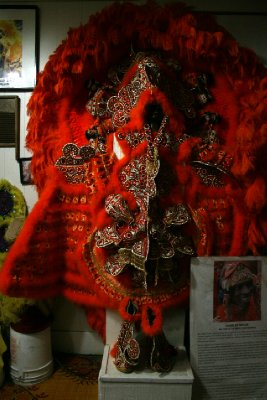 Wall to wall costumes. It was incredible. Everything is hand sewn with no use of glue guns or sewing machines. They make a new costume every year, costing thousands and thousands of dollars. One of the costumes belonging to the "Chief of Chiefs" cost over $20,000. That's more than Josh's car cost. These people are truly dedicated to their craft and I have a great respect for them.

The next room he took us into had artifacts from other historical Treme organizations, including Zulu, the biggest African American Krewe in New Orleans. We also got to learn about Jazz Funerals, including the funeral of Austin Leslie, which was the first Jazz Funeral after Katrina. I've been surprised at how openly people here talk about Katrina. It happened. It's another chapter in the story of the city. And the story of the first Jazz Funeral after the storm is also part of it. It was very touching.

We leave this city tomorrow and, like most trips, it's hard to return home after experiencing so much. I especially love this city and hope to return here again someday. But I've got to get back to my kitty, Bruce (aka "Baby Boo"), to my friends, and to... the job hunt. Well, that last one isn't very exciting, but it's a fact of life.

This blog requires you to be a logged in member of Travellerspoint to place comments.

If you aren't a member of Travellerspoint yet, you can join for free.