On Thursday morning we woke up to a frosty surprise coating our car. It was a chilly 29F when we left our room and set out on the Great River Road. Even the locals seem surprised by the cold snap, so at least being Californians isn't an excuse for freezing our butts off this time. 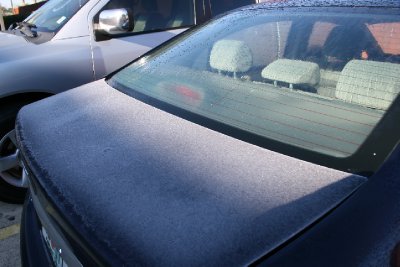 Our journey down the road began in downtown Baton Rouge, with a brief driving tour of the sights. We saw the old capitol, the new capitol, and the LSU campus among other things. 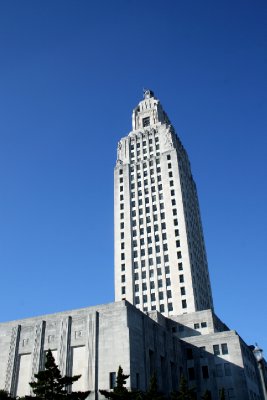 As soon as we exited the LSU campus the scenery drastically changed. Suddenly we were in rural Louisiana. The road would be paved one minute, then gravel the next. For the most part we couldn't actually see the river. It was just to our right over the levee, but occasionally we'd see a boat go by above us, confirming that we were on the right track. But mostly we just enjoyed the scenery around us. 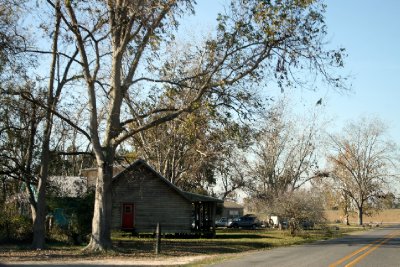 We passed small country homes, farmland, ranches, mobile homes, and factories. Lots and lots of factories. Companies seem to like to use the water from the river for whatever purpose in their factories, so the banks are densely populated with smoke stacks and menacing windowless metal buildings.

At one point we crossed the river to visit some of the old historical plantation houses. There were many to choose from, but we chose to visit Oak Alley. It's appeared in many movies, but it's probably most famous for being Louis' home in Interview with the Vampire. But the home has a vibrant history outside of its media appearances. It started off as a sugar cane plantation, passed through a couple of other owners before being restored and preserved as it is today. Now it's one of the most famous houses along the River Road. 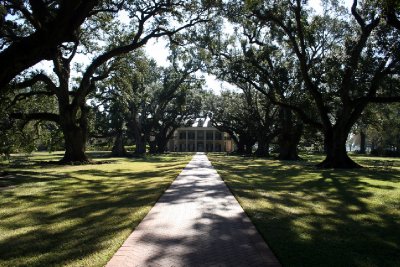 Along our trip we noticed huge stacks of wood lined up on the levee near the river. We were both confused at first, but I vaguely remembered it had something to do with the Christmas season. I couldn't quite remember what, but a Google search after the fact confirmed that they were for the Christmas bonfires. They are an exclusively Louisianan tradition that dates back centuries to before the levees were built. I wish we could be here on Christmas Eve to see them light up! 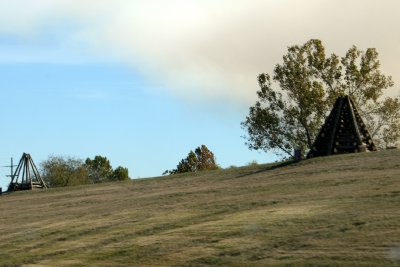 We neared the Big Easy and the quiet countryside gave way to crowded suburbs. As soon as we turned down St Charles Street we knew we had arrived. 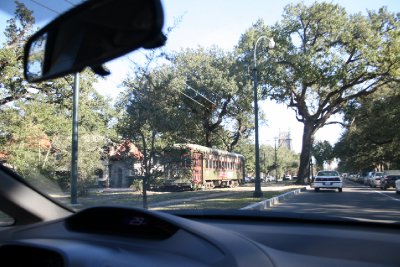 We were both quite groggy from our road trip, but we dragged ourselves over to Bourbon Street to get a taste (figuratively and literally) of what was to come. We shared a small Hand Grenade and strolled down the street just after sundown. But we were both too tired to stay long so we headed back to our hotel just a few blocks outside of the French Quarter. We are here for six nights, so we have plenty of time to get smashed and take advantage of our hotel being within "stumbling distance" of Bourbon Street.

In the meantime, here's a picture of a Hand Grenade dancing around promoting the drink while entertaining passing children. 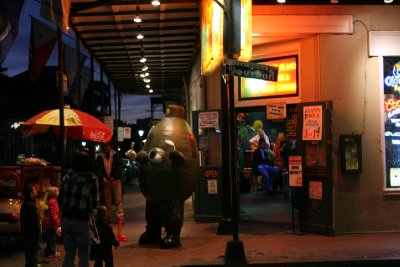 Keep in mind there is a giant Cathedral just a few blocks away from all of this debauchery. You pass by some strip clubs, bars, and other naughty things only to see this staring at you from down the street: 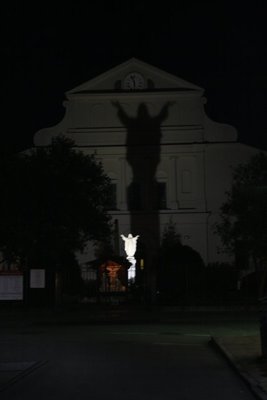 Today we got to see the Quarter wake up. Most stores were closed, but we got to enjoy it with only the locals who were out doing the dirty work that most tourists don't get to see. We were only up that early because we wanted to get laundry out of the way, but it turned out to be a fun experience anyway. 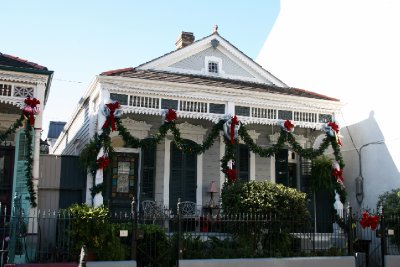 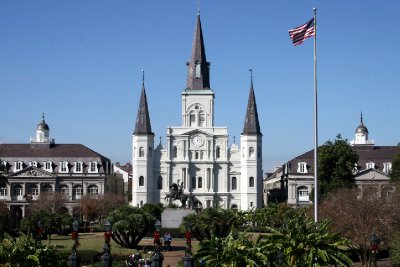 Tonight we'll be headed out to take a walking tour and have some more fun on Bourbon. Tomorrow there is a Gumbo Festival in the Treme and an art fair in the Bywater that we want to check out. But who where we'll end up.

Previous Next Table of contents

Ya'll have to let us know how the next 6 day go, smashed, toasted lol. Your tripmakes me want to back to Bourbon to party. The French quarter is so much fun. There is also so many other things to do.
Take care Capt. Glenn

I love that you get to see so much and you don't seem rushed at all. You would be a perfect personal tour guide.... I want to hire you when I go on a trip...lol

This blog requires you to be a logged in member of Travellerspoint to place comments.

If you aren't a member of Travellerspoint yet, you can join for free.